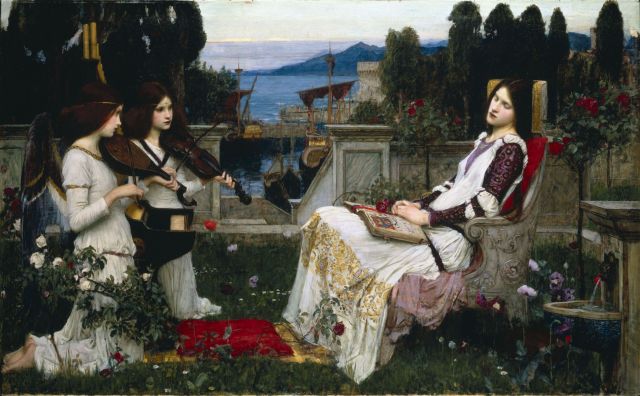 The heavenly cast setting the stage

I mostly defer to the time-tested wisdom of ancient astrological delineations in my astrology practice but I also keep an open mind and an eye out for the newer heavenly bodies and their significations — asteroids and power points etc. — especially when they punctuate the energy of the transits in such an obvious way (discussed later) as they are on this Full Moon of April 19 at the critical 29th degree of Libra opposite an exalted Sun at the 29th degree of Aries. An event occurring right at the last degree of a sign is significant in a headlining sort of way — something decisively changes, usually in the form of a culmination or ending. Add to that the fact that Full Moons generally indicate moments of completions or culminations — a report card of what your endeavours have resulted in, plus the degree at which this Full Moon occurs is part of one section of the sky dubbed the ‘Via Combusta’ (between 15 degree Libra and 15 degree Scorpio) where the Moon is considered to be generally weak in her ability to bring things to fruition in the way that you would prefer or rather, in the strictly conventional way. Venus, also at the end of her sign of exaltation at 28 degree Pisces is exerting a subtle influence on the Sun, and creating a sort of self-defeating situation for the Moon, which has its spiritual benefits. At this time the Sun’s dispositor Mars will be in Gemini in mutual reception with Mercury in Aries — swapping places in each other’s house of rulership they will facilitate and strengthen, among other things, the need for athletic sex, as well as the ability to communicate and take action expediently. On Full Moon day Mercury is conjunct Chiron underscoring a ‘think and do different’ vibe.

There is a strong signature here of becoming aware of a world of possibilities and learning potential which we have denied ourselves by letting social mores define what we invest our energies into. But this is about becoming aware and taking action.

With the Sun (soul), Moon (emotional mind) and Venus (pleasure instinct) engaged at this time in the formation that they are, a partnership could be coming to an end in its current form regardless of how much passion and hope you began it with. Something tells us that what we have is not enough in some way, that there is need to explore other ways  to relate or other people to make the soul sing. You could reach a realisation that a coupling just isn’t for your highest good or inspirational enough. The term ‘conscious uncoupling’ comes to mind. The wife* could decide to graciously walk away from the marriage to make space for the mistress they just cannot compete with, or perhaps the mistress is brought into the marriage by the husband regardless of what the wife wishes. In walking away from a partnership or altering its terms to include ‘third parties’ you might act out the crystallization of the main lesson of Libra consciousness which is doing right by others with a dispassionate sense of harmony — not what is prescribed by human-made law, but what feels balanced. There is a distinct tone of some alternative forms of partnership contracts — spoken or written — emerging from this dynamic.

Some couples might find themselves discussing the need to explore alternative sexual arrangements ranging from swinging, to threesomes, to polyamory, to enacting fantasies.

And now for modern astrology: the mother, the seductress, the sister-wife

Interestingly, there is an Air Trine** being formed by the Moon in Libra, asteroid Juno at 29 degrees in Gemini, and Black Moon Lilith (the apogee of the Moon’s orbit) at 28 degrees Aquarius. This is a supercharge of elemental Air energy uniting Luna — the wife, the mother, Juno***  who in modern astrology represents the partnership dynamic between the wife and the husband, and what the wife might resort to to keep her husband in check; and Lilith *** who represents the ‘witch’, or the feared female outcast (not that she cares) who refuses to conform to any order or structure that undermines female power and sexuality. A cooperative formation between these three expressions further punctuates everything mentioned in the section above about changing partnerships. The changes will most likely come from or be triggered by the female in the equation. This could be the wife joining forces with the mistress, or choosing to enjoy the same freedoms her husband has been. There is nothing conventional about this. And even the usual ‘Venusian’ forms of expression society has come to expect of women are  promoting the dissolution of boundaries that block the flow of love and creativity.

With the Moon (significator of mother), disposited by Venus (also significator of mothering received according to Vettius Valens in Anthologies, among others) in the sign of Pisces (the ultimate expression of mother-child bonding), trine Black Moon Lilith (the devourer of human children, the antithesis of mothering) making contacts there is a theme here about motherhood as well. Women who have sacrificed their goals and neglected their female sexuality in favour of disproportionately giving of themselves to nurturing their child might feel ready to cut the proverbial umbilical cord. This will be an emotional passage to say the least.

The culmination of a creative project or inventive endeavour might result in something that seems to tick all the boxes in terms of form, but somehow lacks soul. Or in a more positive development, you might decide that what should have been a project completed, is just a turning point towards further improvement, experimentation, or research. It’s the sort of energy that keeps the artist or scientist seeking — which is always a good thing eh?

Advice for partnerships and projects alike

Beware of taking what you think might be a munificent or inspired course of action — the ‘right’ or imaginative thing to do — because fairly soon afterwards you might have to contend with feelings of envy or survival anxiety and even a sense of having to fend for yourself in a situation that feels like ambiguous or unsettling in some way.

I stumbled upon the Story of Saint Cecilia and was gobsmacked by the quite literal description of yet another way a ‘marriage’ (or any sort of collaboration) could play out in the times of this Libra Full Moon, in the way that Cecilia keeps herself chaste within her earthly marriage for the sake of divine love. 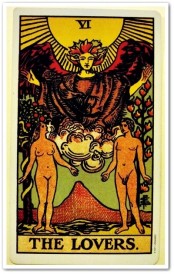 In terms of the Rider-Waite Tarot, this Full Moon can be viewed as the story of ‘The Lovers’ which presents us with the dilemma of Adam. After Eve unwittingly takes a bite of the forbidden fruit, Archangel Jophiel appears to expel her from Eden. Adam , who believes himself and Eve to be partners for life, expresses his wish to accompany her even though he has the option to stay on. This display of loyalty from Adam comes from what we on earth might think is a good place, yet it earns him a place in hell after death along with Eve for he has exercised his free will to go against the divine scheme. The message seems to be that what we think is ‘good’ or ‘right’ in human terms might be quite the opposite of what is spiritually desirable. The Lovers card in readings represents a moral dilemma between sticking with tradition/God’s plan/ higher minded goals/ long-term spiritual gains, and choosing material gains/ earthly delights/base desires/short-term gains. Interestingly, I have noticed many Tarot readers viewing this card as a love triangle too, which seems to fit the current Full Moon theme  in terms of the pure imagery of the card which can also be seen as the wife looking to her husband’s ‘ethereal’ lover in search of a resolution.

But the card’s number 6 in the path of the Sefirot represents a second level of manifestation of the divine spark, where some kind of gains balance out the stasis of the first level of manifestation and an experience of deprivation that often results from saturation. For The Lovers to be assigned the number 6 perhaps the message to Adam is that Eve’s departure is necessary, but that he must have faith that his loss will be balanced out as the universal forces ultimately seek harmony. Or perhaps it means that a reliance on one’s physical senses alone is destined to mislead humans away from sources of higher intelligence.

But life isn’t about absolutes therefore perhaps the question that The Lovers card and this Full Moon raises for us is: is there a happy medium between staying true to our earthly commitments and following our spiritual path? Is there a way for our spiritual pursuits to bring us earthly delights and vice versa?

It is possible you might have the revelation that something about your routine (or lack of it), health management or self-care practices is promoting an unhealthy addiction or creating some sort of imbalance which affects how you move.

I have a planetary pile up in Cancer natally so lunations affect me more than most. I’ll probably just get a massive headache as I often do around Full Moon times.

Sometimes even the most dramatic seeming planetary transits only show themselves as some unexpected little ache here on earth. It really depends on how much and what sort of nudge an individual needs to stop and pay attention to the spiritual aspect of life. Clearly I’m most effectively reached out to with physical pain!

* I’m using conventional terms pertaining to spousal roles to illustrate best the archetypal energies of the unfolding events. These are not to be taken literally, but applied to your situation as you see fit.

** Equilateral triangle in the Air element. Trines are aspects made by signs 120 degrees apart from each other. According to the ancients who understood divine will and the metaphysical world in geometrical terms, the Trine forms a triangle, or a trinity, that signifies harmonious manifestation blessed by the heavens.

*** Juno or Hera is Jupiter/Zeus’s sister-wife, much troubled and constantly plotting against her husband’s many paramours and consequent progeny.

***Lilith is the Biblical and Talmudic first wife of Adam, created, like Adam, of the earth and therefore his equal. But she abandons him and voluntarily exits Eden in an act of defiance towards God when she feels subjugated by God’s prescribed rules of coupling.