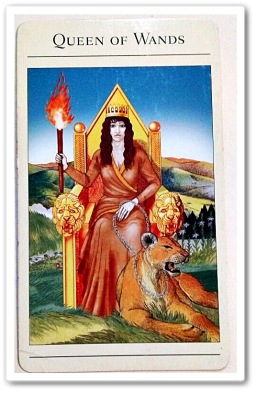 From the nuanced and loaded Mythic Tarot deck

Sorry! I’ll have to excuse myself from posting this month’s tarotscopes. Too much on my plate and not enough inspiration is my excuse. For those interested in the astrology behind my behaviour, I attribute it to transiting Saturn sitting on my natal Neptune in the 12th house before it opposes my natal Venus in the 6th house. I think the effect is that of ‘too much reality’, I’m finding it difficult to connect with the unseen realms, unable to feel the universe’s magic course through me, blocked from letting the occasional flight of fancy take me away from mundane to-dos.

See, insidious as Neptune might be in luring us into sabotaging illusions, it is also a planet that allows us to build the castles in the air that, like mirages in a desert, keep us going on through the ho-hum of daily life. It’s the hope of reaching Emerald City that keeps us plodding on the yellow brick road of responsibility and duty.

But with Saturn keeping a stern eye on my Neptune just now, I can’t hear the music of the spheres, nor can I see beyond the veil. For me, this feels like death because with South Node in my First House, I AM detachment and escape and imagination and otherworldiness embodied, so dealing with quotidian affairs feels especially alien to me.

Still, the bright side of this transit is that by being forced to deal with real issues I am perhaps getting my house in the sort of fantastic, sublime order I’d like it to be. The grown up things I’m tending to (financial, professional and domestic affairs) will ultimately support a more sustainable way of being ‘away with the fairies’, as I like to.

And the card I pulled as a message to meditate on in November for one and all supports my ‘can do’ take charge attitude to the doldrums. The Queen of Wands (drawn from the Mythic Tarot that can be quite dour in its messages — an apt deck for my current mood) is a bright flame of fiery, feisty energy.

The Queen of Wands is a message to men across the world to respect, honour and nurture creative intelligence, power and ambition in the women in their lives. There’s a wealth of genius, humour, inspired action and pioneering thought you lose out on when the women are so busy fending you off for one reason or another that they can’t channel their energy into more productive ventures. It’s everyone’s loss, even yours!

The Queen of Wands is a message to all women to be unabashed and clear-headed about what they want and go for it. It is about getting in touch with our ‘male’ side and stepping out of the roles and images imposed on us. Don’t shave your legs if you don’t want to! But perhaps we are so far gone in our conditioning that we can’t even imagine wanting hairy legs. For an experiment, be an animal!

The Queen of Wands is a message to all of us to embrace action over procrastination. Also, it is a message to respect the beast inside of us, in others, and to find healthy outlets for those urges that, when repressed, can end up exploding in others’ faces as damaging actions. It is also a message for us to give space to beasts from other species and let them enjoy the same freedom and existence we humans feel entitled to.

I hope you have a nice November. I shall return in December with mega, giant, extra long readings for 2018! So do come back! See you! 🙂

I'm the happy medium trying to find the happy medium!
View all posts by Ma Megha →
This entry was posted in Uncategorized and tagged astrology, november, tarot. Bookmark the permalink.