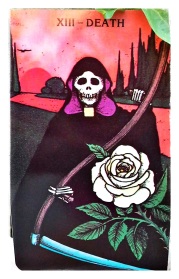 Death from the Morgan-Greer Tarot deck

I’ve come close to drowning twice in my life — once when I was four and later, when I was twelve. Even as just a kid with an infant consciousness I remember on both occasions my short life flashing before my eyes. It’s an amazing showreel not of highlights but of every. single. second. you’ve lived (or perhaps that’s what the mind fills up the airtime with in the absence of decades of experiences?). I also remember the sensation, especially on the second occasion, of splitting into the physical and intangible. I could feel my body cry out for help, every time it bobbed up over a swelling Arabian Sea, in a mechanical sort of way (like it was something I was mimicking from the movies, and quite unnatural to me). And I remember my intangible self feeling floaty and wonderful — there was no pain, just detachment; a sublime sort of disassociation.

The next time (I feel) I came close to dying was on a scorching summer afternoon when, inebriated on a cocktail of liquid, solid and vaporous intoxicants, I slipped and slid down a flight of marble stairs in a hotel lobby head first, on my back. I was already half conscious anyway when I had attempted my trek upstairs to begin with (I suspect on all fours, if I remember somewhat the quizzical look the staff and lounge guests gave me), so my descent was not made on high alert. Falling with your head hitting one hard marble stair after another feels like your head is a medicine ball being rattled around in a wooden carton. It did not hurt. I truly felt like a medicine ball. But I did manage to think then: This is it. This is how I die. It was said in the cool, calm tone of a Billiards game commentator. Again I felt sublime bliss in letting go. Again the experience of the physical body as separate from my intangible self. (Still, the next time I was high on a similar cocktail and felt myself fall in the middle of a busy plaza, I made sure I collapsed like a dropped shirt to save my head from a hard impact.)

Two other times I fell unconscious felt similar: once at age eight when I fainted after a blood test, and then when I was 28 and passing out in the toilet of a coffee shop in Amsterdam. On the latter occasion I heard the Billiards game commentator in my head again: This is it. This is how I die. Alone in a foreign country.

It’s plain for anyone to see my penchant for drama* in these calm pronouncements as if they were the closing act of a play. Am I just waiting for death to happen? (Au contraire, I’ve quite the lust for life and its mysteries). Or is it the suspense of how it will happen that keeps me questioning? I do have a thing for unearthing mysteries*.  It’s a proclivity which has translated into a wide range of activities from stalking my ex (and others’ exes, on request) online to studying ancient lores for the meaning of life to exploring every conspiracy theory that comes my way to actually digging up dirt to find buried treasure.  I think this curiosity is also my intuition.

Do I fear death? No. I do fear the pain that precedes death in instances of illness, surgery and accidents. If my experiences are anything to go by, the actual leaving of the physical body is rather pleasant –like you’re a balloon about to be let loose on a gentle breeze.

The one instance of prolonged death-spurred transformation that I do not have pleasant memories of was an ego death that took four years. I had been abandoned by my love (or in socially-well-adjusted human speak, I was going through a break up) and I think it was more anguish of losing to another woman (and the *curiosity to know how he felt with her, and how it was different and better from when he was with me – an *ego issue) than the absence of a loved one that brought on intense anxiety which then translated into all sorts of physical symptoms, acute weight loss, tingles, breathlessness, lacy-doily-like flashes in one eye. There was nothing numinous about any of this. It hurt like hell and it felt endless.

Ironic how physically life-threatening situations brought me calm and an ego death brought so much dreadful, physical pain….

With my *Sun in the 8th house, the ego death was a transformation just waiting to happen. Especially since it was this experience that once again renewed my interest in the 8th house matters of astrology, occult knowledge, death. With the Sun (father) in the 8th house, my father also met with a near-fatal accident when I was two. But he didn’t die, he survived and came away with quite a real Near Death Experience to talk about. Needless to say it changed him for ever too. The 8th house is the house of death — yours, your loved ones’, of situations that give you security. The inherent message is that there is life or something else beyond endings. Endings are not to be feared. How you seek them out, or how they find you, is a matter of your inherent nature as depicted by the planets placed here (or by the planet ruling the house).

May I, from limited experience, make the outrageous leap of logic that death only hurts when your ego is too attached or primarily validated by the physical realm? Do we bring on ourselves painful deaths because of ego? In astrology we see many a ‘Martian’ personality dying in car accidents while racing against someone on the road (and other similar situations provoked by rage or aggressive competition). Martians are also the brave fire-fighters and soldiers who die saving lives — a noble way of being attached to physical security, I must add respectfully. We also see Saturnine individuals who favour rules over personal whims live the disciplined life, and live to be a 100; the death is natural even if their life is not always one of much pleasure. We also see Venusian/Neptunian artists  seeking  true ecstasy, dying of drug overdoses — not a particularly painful way to go, I guess.  But then there are other Venusians who favour the physical realm of food so much they die of painful conditions like Diabetes or other obesity-based malfunctions. I’m just broadly generalising, of course, to introduce this line of thought.

But what of all these recent Cancer deaths of famous musicians and actors that we mourned at the beginning of 2016? Where was their ego validation at? In the Jupiter-ian (also the facilitator for Cancer) exercise of  proliferating new perspectives? I wonder…

According to Hindu philosophy evolved souls get the gift of a painless death. Can’t we all get to that state and banish disease and trauma forever?